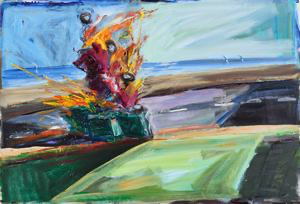 Museum Purchase with Charter Member Endowment Fund
2001.86
Carlos Almaraz was among the very first artists in the early 1970s to self-identify as a Chicano. Chicano is an informal term in both English and Spanish denoting a US resident of Mexican heritage, and the Chicanismo movement emerged as a revolutionary impulse asserting cultural pride during the early 1970s, amid a wave of civil rights struggles among many so-called minority groups.

Almaraz, though a charismatic and legendary founder of Chicanismo, early on began to perceive the constraints inherent in concepts of identity based on such determinants as ancestry, race, and ethnicity. In the mid-1970s his works began to express idyllic, joyous themes, like the beauty of nature, the exuberance of American urban life, and the pleasures of home; but darker, more troubling themes also emerged, such as natural disasters, burning houses, and mysterious dream images.

His oil painting Untitled (1987) is a stirring example of the many âcar crashâ pictures that Almaraz created throughout his career. These are compositions of spectacular visual energy: explosions of wild brushwork painted as if in a frenzy; ravishing colorsâblinding reds and magentas, blazing oranges and yellows, all densely applied; foregrounded depictions of crumpled car bodies, twisted beyond recognition and sprawled across the black asphalt of a freeway, often against a background of intensely luminous azure skies. Almarazâs car crash pictures add up to a recurring nightmare version of the idyllic dreamspace of California that still persists in American popular culture. Yet horrific as these scenarios are (as with so many distressing or grotesque sights we happen upon in daily life), they exert an irresistible attraction to our senses and imagination. As hard as it is to behold such horrors, it is even harder to look away.