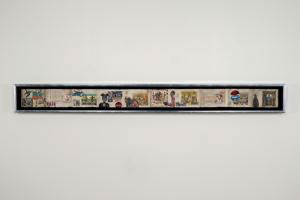 Gift of the Marie Eccles Caine Foundation
1995.13
A codex (from the Latin caudex, meaning âtrunk of a treeâ) is a book constructed from a single sheet of paper folded so that its pages can be flipped, like a modern-day book, or opened out, like a scroll. The most important advance in bookmaking until the invention of the printing press, this ancient form of information technology was developed at roughly the same time by the Romans in Europe and by the Maya in Mesoamerica.

Chagoyaâs codexâwhose subtitle translates to âcannibal islandââdeals with visual culture and ideas as these flow anarchically across the US-Mexico border, oblivious to any international frontier or legal impediments. This artwork-as-book also takes direct inspiration from the format and worldview of Maya codices, ancient encyclopedias that barely survived the Spanish conquest.

Using photocopied images and text that he transfers onto handmade paper, Chagoya ruggedly and colorfully juxtaposes pictures and writings from across artistic traditions and historical epochs. What he arrives at mimics the rich diversity of the online world, yet also recalls certain premodern painterly fantasies, such as Hieronymus Boschâs Garden of Earthly Delights. Like that sixteenth-century multipanel work, the natural and supernatural forms depicted in Codex Canibalius Insulae often prove both visually challenging and outright inscrutable.

Among the elements Chagoya lifts from disparate original sources for his twenty-first century codex are Maya and Aztec imagery, sixteenth-century European prints depicting New World inhabitants, popular comics like Superman and Wonder Woman, and the artistâs original sketches. Taken together, the roiling imagery animating Chagoyaâs Codex presents less a synthesis than a hybrid product, an enigmatic satire of the way the multicultural imagination cannibalizes competing traditions and, invariably, makes them its own.