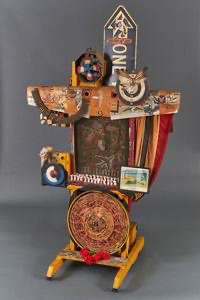 Gift of the Marie Eccles Caine Foundation
2004.12
From 1961 to 1963 Ben Talbert abandoned painting and worked on an assemblage that would embody his boyhood dream of being the hero of the air ageâThe Ace. Ironically, the unneeded easel became the framework for the piece. At the center of the easel is a discarded studio painting, cut open to reveal a collage of World War I heroes and dream girls. At the center of the collage is the ace of hearts, with the corner of a dollar bill along one edge.

For the ace of clubs, âthe proverbial ace in the holeâ is written on an arrow pointing to a loversâ embrace. Its role as the death card is symbolized by a tiny human skeleton. At the top of the work is a âOne Wayâ traffic sign, pointing up. On its arrow is the ace of spades with an image of Ray Charles in the center bearing the legend, âthe Ace is High.â A cover on the side of the easel opens to reveal a mirror with an eye at its center. Next to it is a picture of a man poised in space below the words, âyou are the Ace of Diamonds.â

Most of the images on the front of The Ace refer to the romantic associations of flying. The back is completely different, its verticality interrupted by jagged, irregular shapes and a diagonal row of trompe lâoeil bullet holes; the violence of aerial warfare is its dominant theme. At the pinnacle of the rear is an atomic bomb blast. Two aviators fly above it, one commenting, âTruly we are finished.â A dummy bomb is attached, labeled with the names of cities destroyed by aerial attack. Mickey Mouse is also on the bomb, pointing downward to a box, inside of which are tightly packed dolls staring upward in horror and dripping with red paint.

The Ace is Talbertâs largest work, with the most elaborate structure of references and visual-verbal puns. So many of the artistâs youthful obsessions are referred to that it can legitimately be called a self-portrait. In fact, his elder brother used to greet him with, âWhat dâyou say, Ace!â