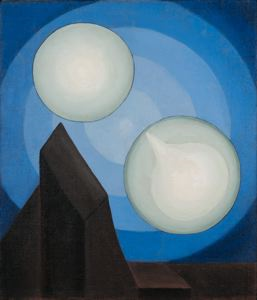 Gift of the Marie Eccles Caine Foundation
1988.91
An early California modernist, Henrietta Shore created accomplished works of art in a career that spanned the first half of the twentieth century. During a sojourn in New York in the early 1920s, she developed a series of what she termed âsemi-abstractions,â to which her remarkable painting, Two Worlds, belongs. Described in a 1923 art review as âan abstraction with an astronomical basis,â this piece clearly refers to the cosmos. Its luminous orbs, seemingly moons, command a celestial field, defined by concentric rings of ethereal blue that issue from a light nuclear core and become progressively deeper in tone and expansive in reach as they approach the pictureâs frame.

Yet even as it takes the natural world as its touchstone, the painting presents a wondrous vision of pure invention, springing from the artistâs imagination and an aim to express the mysteries of nature in modern pictorial form. Although reserved in tone, it conveys a feeling of transcendent yearning, a desire to access heavenly realms beyond mortal reach, an aspiration that would lead scientists decades later to fly spacecraft to the moon.

Ultimately, though, Shoreâs image is a poetic one, rich in allusions, as the moon has long been associated with women and their cycles of fertility. As such, it is significant that Shoreâa woman working in a profession dominated by menâchose to assert her place in that realm through this iconic symbol of womanhood. She even doubles it, thereby augmenting its power, and further presents a peaked projection that rises suggestively toward the ovular form above as if wishing to access its life-giving light. Subtly, Shore deploys these evocative forms in a way that suggests male and female procreative forces coming together to bring new lifeâand hence new worldsâmagically into being.