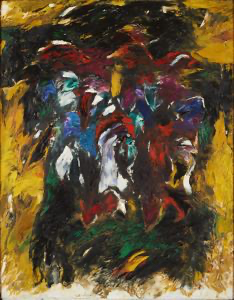 Gift of the Marie Eccles Caine Foundation
1996.32
Although not as well known today as her contemporaries Helen Frankenthaler and Joan Mitchell, Sonia Gechtoff holds the distinction of being one of the few women abstract expressionists to attain national prominence on a par with her male colleagues. In 1954 she participated in the Guggenheim Museumâs Younger American Painters, a roundup of emerging talent that included Willem de Kooning and Jackson Pollock. A few years later, in a Time magazine review of the 1958 Brussels World Fair, her painting Love at High Noon was the only artwork reproduced. By then she had been given a retrospective at the M. H. de Young Memorial Museum in San Franciscoâthe first major female abstract expressionist on either coast to have a solo museum exhibition. Gechtoff attributed her success to a lack of chauvinism in the West: âI experienced no discrimination in San Francisco . . . [It] was nothing like New York in terms of women painters. There were only a few of us, but we were always treated equally.â

Icon bears all the hallmarks of the paintings that brought Gechtoff acclaim. As with many of her works after 1955, it shows a hedonistic affection for paint laid on in broad, juicy strokes applied with a palette knife. Some of her works are composed of shimmering fields of feathery gestures suggesting a view of vast, undulating grasslands, inspired by Harry Callahanâs photographs of marshes and Michael McClureâs nature poetry. Other paintings, like Icon, are less suggestive of landscape than they are of human presence. Art historian Gerald Nordland eloquently described these works as evoking âspectral figures emerging from a fountain of expressionist paint handling.â Gechtoff identified paintings such as Icon, vaguely hinting at bodily verticality and outstretched arms, as female portraits, reversing the gender associated with the crucifix.

Keywords
Click a term to view the records with the same keyword
This object has the following keywords:
abstract expressionism, black, blue, gesture, oil paint, red, yellow
Exhibition List
This object was included in the following exhibitions:
Also found in
Click a portfolio name to view all the objects in that portfolio
This object is a member of the following portfolios: