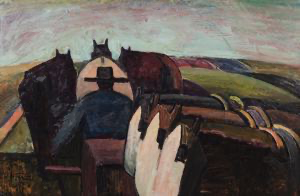 Gift of the Marie Eccles Caine Foundation
1985.106
In 1918 C. S. Price moved to Monterey, California, taking a room and studio at the Stevenson House, a locus of activity for a loose and lively association of artists struggling to develop a more progressive art. Price had spent the first thirty years of his life on ranches throughout the West, carrying art supplies in a saddlebag on his horse. This classic pioneer upbringing fit his character as a solitary man, who lived a simple life in search of what he called âthe one big idea.â

Priceâs path to modernism was an unusual one. He carved small farm animals, carts, and human figures out of wood, arranging them on a tabletop to rough out his compositions and visualize his route to abstraction. The artist may have used such carvings to conceive Plowing, a modernist work constructed from juxtaposed planes and blocks of color.

Here he depicts a farmer in a plow or wagon being pulled by three horses. Positioned diagonally behind the plow are three additional horses, wearing blinders and blanket saddles. The rhythm of the curvature of these horsesâ backs and the distant fields is more important to Price than creating a natural space. Compositionally he builds up a chain of at shapes, from the horsesâ white muzzles, to the top of the pink wagon, the farmerâs blue shirt and black hat, the front of the wagon, and finally the head of the middle horse. The strong pink diagonal on the left adds an element of dynamic movement.

Price understood abstraction earlier than most and eventually was one of the first West Coast moderns to achieve national acclaim. The body of work he developed in the 1930s and 1940s had a profound influence on the next generation of West Coast painters, including Richard Diebenkorn.