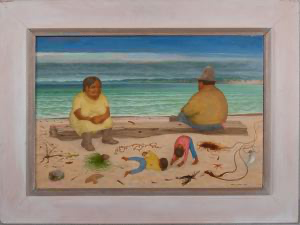 Gift of the Marie Eccles Caine Foundation
1987.5
"Elemental Drifts," a poem by Walt Whitman, informs John Langley Howardâs painting of a Mexican family on the beach in Monterey, California. Whitman wrote the poem during the Civil War, whose death and destruction he had experienced intimately. He mourns those that have been âwreckâd,â and identifies with the âdrift and debrisâ that has washed up on the shore.

In Howardâs painting a man and a woman sit at opposite ends of a driftwood log at the edge of the sea. They are immobile, disassociated from their surroundings and each other. The man faces toward the sea, the woman toward the land. She gazes into the distance while her offspring cavort, digging a hole in the sand at her feet. Surrounding the children is an assortment of flotsam: an oilcan, beer bottles, driftwood, seaweed, a dead fish, and a dead bird.

This disquieting painting is precisely detailed in all its elements. Even the hills lying across the Monterey Bay are clearly delineated. Elemental Drifts manifests a nearly surreal aspect through its introduction of an unsettling ambiguity into a highly detailed and realistic setting. As such, it is an example of magic realism, a style the artist adopted beginning in 1941.

Howard seems to be expressing a flash of metaphysical understanding along with an implicit social commentary. He was one of the few artists in California during the Depression era dedicated to working for social change in daily life, and one of the few who depicted the difficult social and economic conditions of the times. Despite its broader themes, in the end the focus of the painting is the geographically, socially, and economically marginalized Mexican migrant, left adrift on the shores of America.

Susan M. Anderson
Keywords
Click a term to view the records with the same keyword
This object has the following keywords:
beach, bird, branch, child, clouds, hat, man, ocean, oil paint, sand, seaweed, shell, starfish, woman, wood
Exhibition List
This object was included in the following exhibitions:
Also found in
Click a portfolio name to view all the objects in that portfolio
This object is a member of the following portfolios:

Your current search criteria is: Portfolio is "How We See the World" and [Objects]Century is ".