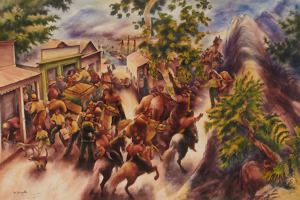 Gift of the Kathryn C. Wanlass Foundation
2010.16.1-2
Nicholas Brigante had a lifelong interest in Asian thought and aesthetics, particularly in Chinese painting of the Song dynasty, with its Taoist philosophy. He was also a pioneer Los Angeles modernist and an organizer of the important 1923 Group of Independents exhibition, the first large-scale show of modern art held in Los Angeles.

In the 1930s Brigante sought to raise the status of watercolor, his favored medium, to that of oil painting. He rejected watercolorâs accidental and spontaneous qualities, employing instead repeat glazing and precise tonal control of color. From 1935 to 1937 he painted a nine-panel watercolor mural, twenty-one feet in length, called Nature and Struggling Imperious Man. This work synthesized his interests in Chinese scroll painting, abstraction, and realistic figuration.

Using the same principles, Brigante made the large-scale diptych The Gold Rush. This work shares the high viewpoint, solid rocky outcroppings, and mist-laden distances of Song dynasty painting. The artistâs use of contrasting reds and greens echoes the contrast he is proposing between untrammeled nature and the culture of the American gold rush.

The mural consists of two vignettes of life in the gold-rush era. In each we see roughly the same panoramic landscape, full of teeming figures. However, in the first the action unfolds from sea to shore, with large ships visible in the distant background, perhaps symbolizing the arrival of the rapacious miners. In the second the activity moves from the town to the distant mountains. Here we see that the inevitable outcome of such restless activity is the destruction of nature, suggested by a leafless tree in the foreground, with great broken limbs.

Your current search criteria is: Portfolio is "How We See the World" and [Objects]Century is ".