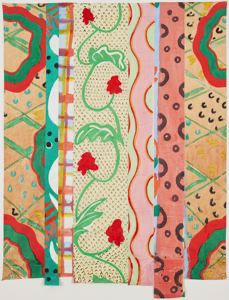 Gift of the Kathryn C. Wanlass Foundation
2003.57
Raindrops Patterning on Banana Leaves is vintage MacConnel: a seemingly casual arrangement of loosely painted patterns on eight strips of cotton fabric that is also a smart response to the artistic dilemmas of the time. In the 1970s, many of the most adventuresome artists believed that painting was no longer relevant. Convinced that abstract expressionism had run its course, and that minimalism had put an end to gestural mark making, many turned to other mediums, the further from oil on canvas the better.

MacConnel thought otherwise. Rather than abandoning painting, he turned it inside out. This wall-size work is eight paintings in one: each of its vertical bands is a thin slice, suggesting that it has been cut from a larger expanse. Plaids, polka dots, oral motifs, undulating waves, and diamond-shaped checkerboards are some of the patterns MacConnel has employed. All are rendered in a punchy palette of bright reds, creamy peaches, bleached greens, fleshy pinks, yolky yellows, resplendent golds, baby blues, inky charcoals, and vibrant whites.

Six of the separate swatches have been stitched together to form a collage; the two longest dangle freely. These purposefully mismatched patterns never settle into a resolved composition, instead colliding vibrantly in a freewheeling coalition of disparate elements. To hold everything together, MacConnel has painted the same pattern on the left and right edges, suggesting that his renegade composition is continuous, beginning again where it leaves off.

That sense of expansion and inclusiveness is at the heart of MacConnelâs art, which played an integral role in the pattern and decoration movement. Drawing on Islamic tile work from Spain and North Africa, embroidery from Turkey, woodblock prints from Japan, textiles from the United Kingdom, and carpeting from Iran and India, his globe-spanning mÃ©lange treats painting as a point of departure for multiple discoveries.

Keywords
Click a term to view the records with the same keyword
This object has the following keywords:
acrylic paint, blue, blue-green, cotton, curvy, green, leaf, pink, plaid, polka dot, rectangles, sewn, vine, white, yellow
Exhibition List
This object was included in the following exhibitions:
Also found in
Click a portfolio name to view all the objects in that portfolio
This object is a member of the following portfolios: