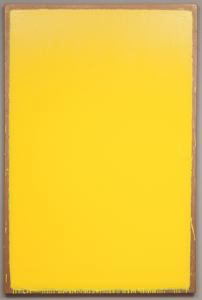 Gift of the Marie Eccles Caine Foundation
1999.5
Leo Valledorâs Sunprize is a monochrome, vertically oriented yellow rectangle. The color of the painting grows in intensity from top to bottom, where the yellow area segues into a fringe of drips. This shift in tone and evidence of the fluidity of the medium are suggestive of the painting process and the passage of time. The yellow rectangle is surrounded by a narrow border painted a neutral brown, which highlights the drips at the bottom as well as other evidence of the materiality of paint, while framing the yellow area, both formally and symbolically.

Sunprize can be seen as a hybrid of abstract expressionism and minimalism. Like the abstract expressionists Jackson Pollock and Mark Rothko, Valledor foregrounds both medium and process while creating an all-over field that is imbued with feelings of sublimity. However, like minimalists Yves Klein and Robert Ryman, he has reduced his visual vocabulary to a striking single color and form.

In the early 1960s Valledor was a founding member of the Park Place Gallery in New York, which featured a cadre of young painters and sculptorsâincluding Mark di Suvero, Robert Grosvenor, and David Novrosâwho were exploring hard-edge geometry, contrasts of color, and shaped canvases. In 1968 Valledor returned to his hometown of San Francisco, where for several years he produced works that departed from the Park Place aesthetic by incorporating built-up, irregular, and dripping paint. Sunprize is one of several paintings of this kind, done in the form of vertical rectangles, tondos, and trapezoids, that Valledor collectively called the East-West series. This name is suggestive of the artistâs recent cross-country move as well as his expressive balance of American, European, and Asian cultural references.

Lawrence Rinder
Keywords
Click a term to view the records with the same keyword
This object has the following keywords:
acrylic paint, yellow
Exhibition List
This object was included in the following exhibitions:
Also found in
Click a portfolio name to view all the objects in that portfolio
This object is a member of the following portfolios: