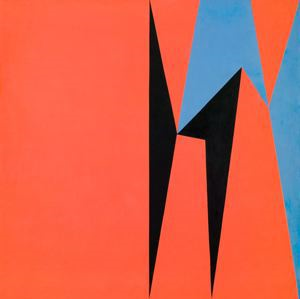 Gift of the Marie Eccles Caine Foundation
2001.55
The title, Dichotomic Organization, was Lorser Feitelsonâs profound-sounding way of indicating that this painting is divided in two. The left half is uninterrupted tomato-soup red, while the right half includes two colorsâblack and a light blueâwhich, in combination with the red, reinforce the dynamism of the self-assured spiky triangles. The tall, narrow wedge of black, whose top-to-bottom side signals the paintingâs bifurcation, has a right-facing point situated halfway above the pictureâs bottom edge, where the horizon commonly occurs in a conventional landscape. With an artist of Feitelsonâs background and breadth, this is certainly no accident.

Feitelson, born in the nineteenth century, was the eldest of the four painters in the groundbreaking 1959 exhibition Four Abstract Classicists, a show that set the stage for the precise, clean âfinish fetishâ and light and space art that would put Southern Californiaâs art world on the map. However, Feitelson reached his brand of lyrically minimal abstraction by a more circuitous route than the others.

For a while he led the life of a typical bohemian painter. He had a studio in Greenwich Village while still a teenager. In his early twenties he went to Paris to immerse himself in modernism and became especially attracted to surrealism. Eventually he and his wife, the painter Helen Lundeberg, launched a movement they called Post-Surrealism, whose purpose was to bring rational order in both content and composition to the âhand-painted dream photographâ imagery of Salvador DalÃ­. For Feitelson, this led to shallower space, highly contrasting colors, shapes Feitelson called âmagical forms,â and outright abstraction. Further distillation led to his own distinctive brand of âabstract classicismââmore romantic, more allusive to figuration (Dichotomic Organization suggests desert mountains in strong sunlight, with blue sky peeking in), and more indebted to early European modernism than the others.

Peter Plagens
Keywords
Click a term to view the records with the same keyword
This object has the following keywords:
black, blue, geometric abstraction, Hard-edge*, minimalism, oil paint, orange
Exhibition List
This object was included in the following exhibitions:
Also found in
Click a portfolio name to view all the objects in that portfolio
This object is a member of the following portfolios: