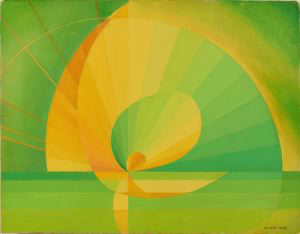 Gift of the Marie Eccles Caine Foundation
1992.6
Hilaire Hiler was a painter, costume and set designer, jazz musician, psychologist, teacher, and author of theoretical treatises on color and abstract design. His most significant contribution to the arts and sciences was the application of psychoanalytical methodology to color theory as a means to investigate the interactions between color and the human psyche.

Born in St. Paul, Minnesota, Hiler grew up in Providence, where as a child he took classes at the Rhode Island School of Design. He later studied at the Pennsylvania Academy of the Fine Arts, Pennsylvania School of Industrial Art, and Wharton School of Finance and Commerce before moving to Paris in 1919. He settled in San Francisco in 1934 and worked as a mural painter for the WPA at the San Francisco Aquatic Park (now Maritime Museum), where he employed a semiabstract style.

By the 1940s, Hilerâs style became increasingly abstract, as he matured into his âstructuralistâ period, a term he used to describe his explorations of color and design in nonobjective compositions. Among his most influential works, Parabolic Orange to Leaf Green is a hypnotic painting of rhythmic colors. It draws upon the artistâs thirty-step color wheel, which he created in response to Isaac Newtonâs famous seven-color wheel of the seventeenth century. Hiler developed a color spectrum based on ten groups (yellow, orange, orange-red, red, purple, blue, turquoise, sea green, green, and leaf green), each of which had three variations. He based the number of divisions on his âthreshold theory,â arguing that the human eye was incapable of distinguishing more than thirty colors. Hiler documented his groundbreaking analysis in Color Harmony and Pigment (1942), which remains an important foundational text today.

Keywords
Click a term to view the records with the same keyword
This object has the following keywords:
geometric abstraction, green, leaf, oil paint, rectangles, yellow
Exhibition List
This object was included in the following exhibitions:
Also found in
Click a portfolio name to view all the objects in that portfolio
This object is a member of the following portfolios: