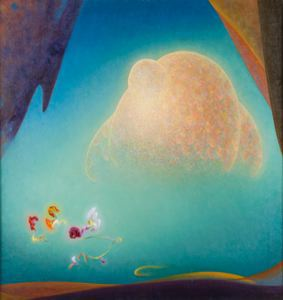 Gift of the Marie Eccles Caine Foundation
1988.25
Agnes Lawrence Pelton is often described as Californiaâs Georgia OâKeeffe. Although under-recognized today, she was a seminal figure in the emergence of modern art in the United States, especially in the context of the American West. She bloomed late and did not create her signature transcendental abstractions until she was forty-five. These highly imaginative, nature-based works are mystical yet concrete, solemn yet joyous, and celebrate the vital forces she felt running through all creation.

Pelton was a pensive individual who preferred solitude and quiet contemplation. A sequence of family tragediesâincluding a national scandal involving her maternal grandparents and famed minister Henry Ward Beecher, as well as the untimely death of her father when she was nineâleft her withdrawn and melancholy. In 1913 she exhibited what she called her Imaginative Paintingsâwhimsical scenes of nymphs in forest settingsâin the landmark Armory Show. While she had a studio in Greenwich Village at the time, she was too introverted to become part of the local Stieglitz circle. In 1921 she left the city and moved into an abandoned windmill in the Hamptons. Working in seclusion, she painted her first mature, iconic abstractions in 1926. In 1931 the windmill was sold, and she relocated to Cathedral City, a tiny desert hamlet outside Palm Springs, California. She lived and painted there until her death thirty years later, drawing sustenance and inspiration from the stark and uncompromising beauty of the American desert.

Nurture reflects her deep conviction that the world is a bene cent place. Parting curtains reveal moonlike orbs that have descended to call upon the earth. Fantastic dancing flowers rise to welcome them with ecstatic joy. Pelton believed in deep mystical correspondences connecting the terrestrial and celestial realms. This scene embodies her feeling that her paintings âare like little windows, opening to a view of a region not yet much visited consciously or by intentionâan inner realm rather than an outer landscape.â

Michael Zakian
Keywords
Click a term to view the records with the same keyword
This object has the following keywords:
blue, blue-green, clouds, flower, off-white, oil paint, purple
Exhibition List
This object was included in the following exhibitions:
Also found in
Click a portfolio name to view all the objects in that portfolio
This object is a member of the following portfolios: