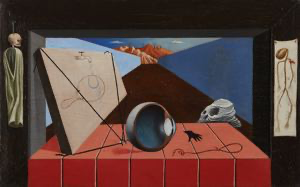 Gift of the Marie Eccles Caine Foundation
2002.3
As a young artist, Reuben Kadish experimented with âPost-Surrealism,â the art movement launched by Helen Lundeberg and her teacher Lorser Feitelson. Post-Surrealism proposed to extend surrealismâs freewheeling alterations of scale, subject matter, and narrative plausibility by arrangements of analogous objects whose relationships evoked grand classical ideas, usually regarding the nature of aesthetics, creation, or sexuality.

Many Post-Surrealist works juxtapose macrocosmic and microcosmic symbols in order to demonstrate the integrated nature of existence, sharing a self-consciousness about the act of art making. Reuben Kadishâs Lamentation is a skeptical rumination on traditional Christian iconography, framed with a depicted painting within the painting executed in the neoclassical style of the Italian Renaissance. Toying with perspectival space, Kadish presents a brick block in the foreground, evoking the platform of the tomb of Christ as depicted by Italian masters such as Piero della Francesca and Andrea Mantegna.

The open tomb covering is suggested by a slab leaning against one of two long stone walls leading to a stark Italianate mountainscape in the background. In this odd space Kadish presents symbols that evoke the grief and wonder associated with the Crucifixion and the witnessing of the Resurrection.

A model of an eyeball in cross-section is jerry-rigged by string to the tombâs cover, on which is drawn a faucet that drips onto a bubble wand. Placed opposite this mechanical suggestion of tears (or lamentation) is a black glove and a nooseâevidence of mankindâs wrongdoing. The skull-like rock behind the platform confirms the maleficence. A hanging skeletal effigy painted on the left of the frame is opposed on the right by a shroud depicting a burgeoning seed in the form of a strange homunculus. Although giving no concrete evidence of the resurrected Christ, Kadish offers a hint of hopefulness on this stage set for imagined miracles.

Keywords
Click a term to view the records with the same keyword
This object has the following keywords:
desert, eyes, glove, grave, hallway, noose, oil paint, post-surrealism, red, rope, table, wood
Exhibition List
This object was included in the following exhibitions:
Also found in
Click a portfolio name to view all the objects in that portfolio
This object is a member of the following portfolios:

The Day After Tomorrow: Art in Response to Turmoil and Hope