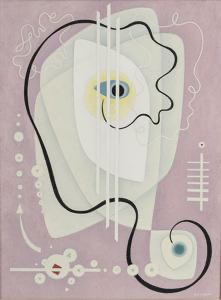 Gift of the Marie Eccles Caine Foundation
1998.85
A statement by Emil Bisttram in an unpublished 1938 pamphlet, The Transcendental Movement in Painting (compiled by artist, composer, and astrologer Dane Rudhyar), described the role of the artist as âinitiateâ and âteacher,â whose work âshould be a means to transmit truths and basic principles of cosmic proportion and evolutionâ using symbolic colors and forms. Bisttram also described his philosophy of life and art as developing âalong occult or broadly Theosophical lines.â

Symphony in White dates from a time when the artist produced several canvases related to music. Those interested in theosophy and related movements, as Bisttram was, understood visual art and music to be two different states of one unifying concept: vibration. In this painting the artist built up transparent fields of white surrounded by shapes and symbols that suggest abstracted musical notation. The vibratory and meandering black line connects the source of sound, compartmentalized in the lower right corner, to a stylized âall-seeing eye,â perhaps indicating the power of vibration, either visual or aural, to transport one past the external world into an internal occult world beyond the bounds of everyday perception.

The amorphous white lines that hover around the miasmatic clouds and eye bring to mind the paintings of âthought formsâ found in the book of that title by theosophists Annie Besant and Charles Leadbeater. This publication was a seminal influence on many artists of enchanted abstraction, including Bisttram and his colleagues Raymond Jonson, Lawren Harris, and Agnes Pelton. Besant and Leadbeaterâs book also posited associations between colors and emotions or mental states, and may have provided an inspiration for Bisttramâs use of yellow (associated with âhighest intellectâ) around the central âeyeâ and the varied shades of blue (described as âhigh spirituality,â âdevotion to a noble ideal,â and âpure religious feelingâ) that strongly ground the painting.

Keywords
Click a term to view the records with the same keyword
This object has the following keywords:
black, curvy, lines, off-white, oil paint, pink, white
Exhibition List
This object was included in the following exhibitions:
Also found in
Click a portfolio name to view all the objects in that portfolio
This object is a member of the following portfolios: