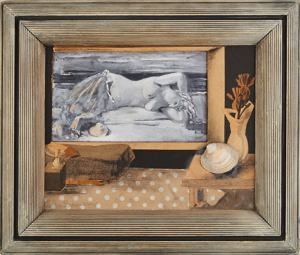 Gift of the Marie Eccles Caine Foundation
2002.9
Venus, according to Greek mythology, was born from the foam of the sea. In response to this myth, ancient Greek statuary frequently depicted Venus standing with upraised arms wringing out her wet hair; Renaissance painters often featured a shell, symbol of the female vulva, as an allusion to the myth of her birth.

In Labaudtâs Birth of Venus, a colossal framed painting of the goddess of love and beauty overwhelms a sparsely furnished bedroom rendered in collage and mono- chromatic tones of orange. Venusâs lower torso is swathed in drapery that flows into the shoreline detritus arrayed in front of her, including an oversize clamshell: in the lower-right quadrant is fixed an actual clamshell. A vase of spiky flowers on the table, as well as one next to the bed, echo the classical statuary. A book on the bed alludes perhaps to the writings of ancient poets like Homer, who inspired the original leitmotifs. Rendered in a subdued sculptural palette of grisaille, Venus has reached the shore and reclines on the sand like a toppled statue.

Labaudtâs Birth of Venus, a witty take on desire, also acknowledges the transformation of art through the centuries. It nods to Picassoâs neoclassicism of the 1920s, with its weighty and heavily modeled sculptural figures set in simple landscapes. Labaudt, well known for grand-scale frescoes painted during the Depression era, also exhibited with the Los Angelesâbased Post-Surrealist group. He executed Birth of Venus in 1935, the year in which the group, also called the New Classicists, was most active. Birth of Venus, rationally composed and organized around repeat motifs, is an exemplary Post-Surrealist work, playing with thought rhythms and analogies while expressing ideas about eternal recurrence.

Each element is chosen to further a narrative, the modus operandi of artists during the Depression era preparing for the execution of public works of art. The painting illustrates how Post-Surrealism took some of its cues from the dominant art movements of the time in Southern Californiaâthe American Scene movement and muralism of the federal art projects, surrealism, and neoclassicism.

Keywords
Click a term to view the records with the same keyword
This object has the following keywords:
beach, bed, bedroom, charcoal, collage, drawing, gouache, graphite, mixed-media, nightstand, nude, sand, shell, table, vase, Venus, watercolor, woman
Exhibition List
This object was included in the following exhibitions:
Also found in
Click a portfolio name to view all the objects in that portfolio
This object is a member of the following portfolios:

Your current search criteria is: Portfolio is "Collecting on the Edge Part II" and [Objects]Artist is "Lucien Labaudt".