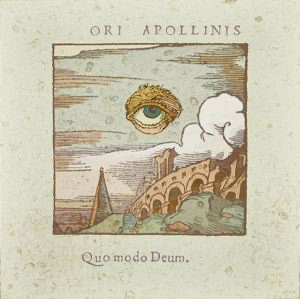 Looking Past Seeing Through: Translation #29
1975

Gift of the Marie Eccles Caine Foundation
2005.4
The Translations, Jessâs series of paintings depicting found images, were begun in 1959, after he had the idea of creating a complex painting on the myth of Narcissus, classical mythologyâs embodiment of self-reflection and image obsession. Daunted by the prospect of incorporating a vast number of figurative elements within a single work, Jess decided first to embark on a project that would teach him more about the craft of figurative art. The result was a group of paintings based on photographs, prints, and drawings, rendered in the manner of schematically outlined and colored paint-by-number canvases.

Over the next seventeen years, as the series grew to include thirty-two pieces, it became less a learning tool than a multifaceted demonstration of Jessâs evolving aesthetic. In reworking the black-and-white source images, he employed an odd abstract expressionist palette, giving the paintings a color scheme that doesnât necessarily coincide with their subjects. Jess correlated each found image with a pertinent textâfrom Plato, William Blake, Gertrude Stein, and othersâthat he inscribed on the back of the canvas. Elaborating on his deep involvement with the project, he stated: âI wanted to make myself aware of what I felt about this image. And this intense meditative process that I had undertaken allowed those feelings to come forth.â

Demonstrating his fascination with the circuitous history of mythic images, in Translation #29 Jess appropriates a woodcut illustration found in Pagan Mysteries in the Renaissance, by art historian Edgar Wind. The image came from a Renaissance edition of a fifth-century text by an Egyptian priest, Horapollos, that inventoried the meaning of hieroglyphics. The depicted emblem represents a divine eye floating above a landscape that features a classical obelisk and aqueduct in ruins. The Latin text translates as âThis is the way of god.â Originating in legends about the eye of Horusâthe Egyptian sky godâthe divine eye is a recurring icon, even featured on the US dollar bill, placed at the apex of a pyramid, symbolizing the nationâs providential stability. On the back of the painting, Jess transcribed a quotation from The Vision of God by fifteenth-century German philosopher Nicholas of Cusa that relates Godâs overseeing vision to personal self-reflection, a crucial theme for Jess and a primary thesis of
the Translations.

A sense of play both grounds and elevates Jessâs work. In Translation #30 he meticulously copies a black-and-white drawing of the interior of an ancient Greek drinking cup that features a priest of Bacchus involved in the ritualistic spinning of a top. The top was a symbol of the passage of time and the movements of celestial bodies. This conflation of a childrenâs game and an ancient religious ritual was an ideal subject for Jessâs investigation of mythic transformation.

Your current search criteria is: Portfolio is "Collecting on the Edge Part II" and [Objects]Artist is "Jess Collins".