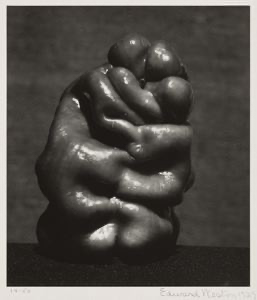 Gift of Dr. Rachael Dunaven Yocom
1984.1554
"I have done perhaps fifty negatives of peppers: because of the endless variety in form manifestations, because of their extraordinary surface texture, because of the power, the force suggested in their amazing convolutions. A box of peppers at the corner grocery hold implications to stir me emotionally more than almost any other edible form, for they run the gamut of natural forms, in experimental surprises."
âEdward Weston, Daybooks

I remember my visits in the early 1950s to Edward Westonâs home, a cabin on Wildcat Hill south of Carmel. I was a student at the California School of Fine Arts. Weston would slowly and quietly show his work without comment, one print at a time, on a small easel. If there were questions, he would answer them, but he did not volunteer his own thoughts. I remember thinking that the images of peppers and other vegetables he photographed in 1929 and 1930 bore similarities to his nudes from the 1930s; some of the peppers were also suggestive of the sculptures of Hans Arp. However, Weston rejected comparisons with the works of other artists. He once remarked, âTo record the quintessence of the object or element before my lens, rather than an interpretation, a superficial phase, or passing moodâthis is my way in photography.â

This image, from his earliest series of pepper photographs, was made using a burlap or muslin background with overhead lighting and was photographed with his 8 x 10 view camera. Later examples were made by placing the peppers in front of a large metal funnel. Unlike those images, this earlier one is complex in form and somewhat anthropomorphic. When Weston first exhibited his pepper images, many of his colleagues felt they ranked among his nest work.

John Upton
Keywords
Click a term to view the records with the same keyword
This object has the following keywords:
black, gelatin silver print, gray, pepper, shadow, white
Exhibition List
This object was included in the following exhibitions:
Also found in
Click a portfolio name to view all the objects in that portfolio
This object is a member of the following portfolios:

Your current search criteria is: Portfolio is "Collecting on the Edge" and [Objects]Object Name is "Film".