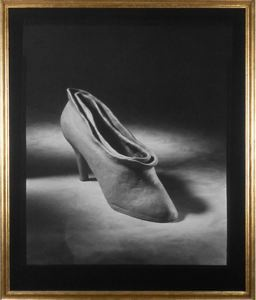 Museum Purchase with the Dorothy Wanlass Endowment Fund
2010.41
Jo Ann Callis was studying design at UCLA when, in 1973, a photography class she took with Robert Heinecken not only opened the door to a new medium but opened it wide, giving her a sense of unlimited permission. Callisâs early work, in both black-and-white and color, often featured a figure, usually a lone female, partially concealed, costumed, or bound, in a spare, domestic setting. These images are provocative and charged, dense with sexual and psychological tension.

Callis has continued, over more than four decades, to favor working in the manner of a stage designer or director, creating environments and setting up characters and objects within them, the scenarios being metaphors for interior states of mind. The body, or surrogates for it (from clothing and furniture to pastries), plays a central role. So too does the home, both the comforts and complexities that it elicits. Callis traffics in the familiar but transforms it into the uncanny. A professor since the late 1970s at the California Institute of the Arts, a hotbed of conceptualism, she remains a sensualist, focusing on the emotional resonance of texture, color, and incongruous elements in play with one another.

Shoe is part of a series of photographs Callis staged using objects she made in un red clay and placed against contrived, evocative backgrounds. Printed on linen, the images marry the tonal qualities of a graphite drawing, the surface of a painting, the presence of a sculpture, and the precision of a photographic document. The shoe here stands like a performer in a spotlight, or perhaps a product highlighted in an advertisement. While the scene seems straightforward, it teems with odd deviations. Shoes function in pairs, yet this one appears singly, in isolation. More than mildly anthropomorphic, its opening is rimmed with fleshy, rippling lips. Simultaneously alive and inert, it is an uneasy fashion item and an unlikely fetish. Callis, from the start, has reveled in just such ambiguity and multiplicity.

Leah Ollman
Keywords
Click a term to view the records with the same keyword
This object has the following keywords:
black, ceramic, gelatin silver print, high heel, linen, sculpture, shadow, white
Exhibition List
This object was included in the following exhibitions:
Also found in
Click a portfolio name to view all the objects in that portfolio
This object is a member of the following portfolios:

Your current search criteria is: Portfolio is "Collecting on the Edge" and [Objects]Object Name is "Film".