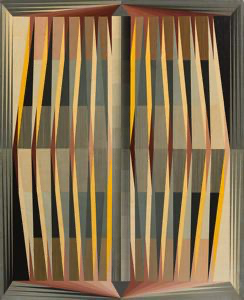 Gift of the Kathryn C. Wanlass Foundation
2016.68
Alpha Booth recapitulates the op art style with which Ed Mieczkowski made his splash in the New York art scene of the 1960s. The vibrant colors, rigorously rhythmic geometric composition, trompe lâoeil touches, and dense network of obliquely crossing lines approximating a moirÃ© effect all combine to act directly upon the viewerâs retina. The painting, in fact, exists only to affect optical perception; all exterior meaning, emotion, and symbolism have been expunged. Throughout his long career Mieczkowski oscillated between such eye-dazzling work and painting (plus occasional sculpture) that engages geometric forms in more eccentric fashions. But it is with this kind of work, and with op art in general, that he is most readily identified.

Mieczkowski spent the bulk of his professional career in Cleveland, where he was one of the central figures in the Anonima Group, Americaâs only op-art-oriented collective. With Ernst Benkert and Francis Hewitt, Mieczkowski promulgated the principles of an art without expression, that affects the eye first and foremost. The group lasted through the 1960s, with its three principals going their separate ways thereafter. Mieczkowski stayed in Cleveland until retiring to Southern California. His approach to op art shares its reliance on vibration and highlighting of structure with those of his colleagues, including non-Anonima painters Julian Stanczak and Richard Anuszkiewicz, but an irrepressible playfulness, however subtle, always distinguishes Mieczkowskiâs art from that of his peers. He does not regard perceptual abstraction as an insensate practice drained of affect, but rather as a generative procedure unburdened by emotion but packing something of a physical wallop. The buzz of Alpha Booth, which the eye convinces the body to feel, exemplifies this concisely.

Your current search criteria is: Portfolio is "Collecting on the Edge" and [Objects]Century is "20th".