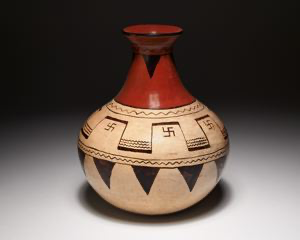 Gift of the Nora Eccles Treadwell Foundation
1988.63
Necked Jar is a prime example of the Maricopa Revival pottery movement by the potter Mary Juan. The finely polished deep red slip of the vesselâs neck and spout was one of Juanâs primary contributions to the resurrection of this lost ceramic tradition. The vesselâs form is simple, yet graceful and features the finely painted geometric designs that were Juanâs specialty. The red and cream-colored slip with geometric lines became popular tourist souvenir items.

Mary Juan was an original member of the Maricopa Pottery Cooperative (1937-1941), a group of nineteen Maricopa women who banded together to build a retail market for their work, establish relationships with galleries, dealers, museums, and collectors. Juan and her cousin, the famous Maricopa potter Ida Redbird, were key leaders of this Maricopa Revival movement. Despite strong support and interest in their work, the cooperative was unable to achieve their long-term goals. Unlike Pueblo pottery, Maricopa pottery has struggled to flourish and today is considered in danger of disappearing as a living art form.

Your current search criteria is: Objects is "Necked Jar".