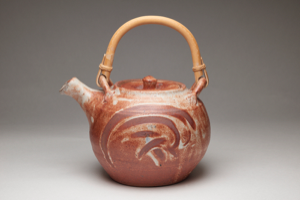 Teapot with Finger Swipes
circa 2016

Gift of Peter and Jodie Gerdes
2021.10.2
Teapot with Finger Swipes is a delightfully expressive traditional form that emphasizes the natural beauty of its materials, utility, and the playful gestures of the artist. The stoneware vessel follows the philosophy of Japanese mingeiâwhich valorized the beauty of everyday objects and the unknown craftsman. However, MacKenzieâs teapot exhibits the gestural qualities commonly found in Abstract Expressionism. By marking the surface of the vessel with his fingers in such a prominent display, MacKenzie transforms the imprint of his hands into ornamentation and gives the solid structure of the vessel momentum.

Trained first as a painter, then a potter, Warren MacKenzie completed his Bachelor of Fine Arts from the Art Institute of Chicago in 1947. He and his wife Alix were the first Americans to apprentice under the famed British studio potter Bernard Leach at his studio in St. Ives, Cornwall, England. MacKenzie remained with Leach for four years, absorbing his philosophy and an aesthetic deeply influenced by Japanese Zen Buddhism. MacKenzie is a major figure in American ceramics that is responsible for the dissemination of traditional Japanese techniques and a philosophy that celebrated the simplicity and beauty of the ordinary ceramic object.

Your current search criteria is: Objects is "Teapot with Finger Swipes".