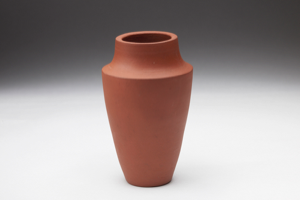 Gift of the Nora Eccles Treadwell Foundation
2021.2
This Halcyon Vase was created by Alexander W. Robertson, who was from a fifth generation brick and pottery workers family from England and Scotland. Robertson moved from Boston to northern California in 1884 where he met a talented artist, Linna Irelan (1846-1935). They opened Roblin Pottery (combination of their names) in 1898. It was fortuitous that Robertson had sent a few Roblin pieces to the Smithsonian Institution shortly before the 1906 San Francisco earthquake when the entire pottery, equipment and inventory were destroyed. At age 36, disheartened from this destruction, Robertson moved to southern California to join his son, Fred, at LA Pressed Brick.

Alexander Robertsonâs father, James, moved the family from England to the Boston area in 1859 where Alexander set up his own pottery in Chelsea, Massachusetts. His brother, Hugh, joined them and then their father in 1872. Chelsea Keramic Art Works made unadorned interpretations of Greek terra-cotta pieces. These were hand-thrown and lathe turned inside, polished with boiled linseed oil and warmed in the kiln, causing the oil to sink into the pores to enhance the smooth surface. Halcyon Vase is very similar to the work done at the Chelsea Keramic Art Worksâunglazed, fine-grained terra cotta clay with lathe marks inside.

Halcyon Art Pottery was located near Pismo Beach, in southern California. Halcyon began in 1903 as a settlement of a utopian group called the Temple Home Association. In 1910, as part of their program to regenerate man, they started the pottery. Under the direction of Alexander W. Robertson, they fired their first pieces made of unglazed red clay with modeled decorations in 1911 and closed the pottery in 1913.

Your current search criteria is: Objects is "Vase".