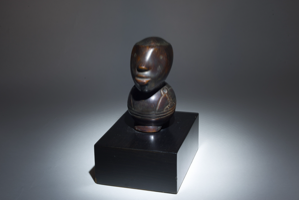 Gift of the Nora Eccles Treadwell Foundation
2020.29
In 1945 and 1949, Johnson received funding from the Abraham Rosenberg Scholarship to travel to Mexico. While in Mexico in 1945, he met the Mexican muralist David Alfaro Siqueiros and visited the Palace of Fine Arts in Mexico City, where he saw the frescos of Rivera, Siqueiros, and Orozco. He also spent time at the National Museum of Anthropology, where he studied sculpture and pottery that had been excavated from various pre-Columbian temples and cities. He subsequently visited Oaxaca and became interested in a gray clay that turned black when fired, traditionally used in regional ceramics. In a letter to friends regarding the clay, he wrote, âI also made a few small figures myself hope they turn out.â

Primitive Head is most certainly one of the âsmall figuresâ mentioned in his letter. The simplification and abstraction of form in Primitive Head suggest the sculptural influence of large Olmec heads. Itâs also not too far a stretch to think that Johnson found in these heads a cousin to the sculptural traditions of African art. Johnson made masks in the mid-1930s that explicitly referenced African art, and he was well aware of the sculptural traditions of Africa. He was also aware of how the Cubists used African art for inspiration, and Primitive Head shares some of the angular planes found in their figurative work.