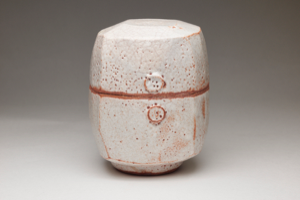 Gift of Peter and Jodie Gerdes
2015.11
This wheel thrown and altered Untitled lidded jar made by Warren Mackenzie is woodfired stoneware, and is heavily influenced by the aesthetic of Shoji Hamada (see circa 1950s Bottle) and Korean ceramics. MacKenzie is credited with bringing the Japanese Mingei style of pottery to Minnesota, fondly referred to as the "Mingei-sota style. His goal throughout his career was the making of "everyday" potsâwhich he did, however, this Jar is quite sophisticated. The top or lid is nearly as tall as the bottom piece, giving it more of a purpose to be seen and admired as precious, rather than to hold pocket detritus!

From 1943-1946 MacKenzie was a silkscreen technician working on training charts and maps. At the Art Institute of Chicago, he first trained as a painter, then as a potter (BFA 1947). With his classmates they discovered Bernard Leach's "A Potter's book.â MacKenzie and his first wife, Alix were the first American apprentices at the Bernard Leach (see circa 1960 Jar) pottery at St. Ives in London from 1949 to 1952. Alix, decorated Warrenâs pots until her death in 1962.

The MacKenzies brought Leach and Hamada for a workshop tour of the United States in 1952. This tour had a far-reaching impact on the American studio pottery movement. He was a professor at the University of Minnesota from 1953 to 1990, and in 1981 was honored by Ceramics Monthly magazine as âone of the worldâs twelve best potters.â One of his primary students was Barbara Diduk (see 1985 Ewer Teapot and cups). As an inspiring teacher, MacKenzie embodied the philosophy, impressing young potters with a dedication to the ideals of simplicity, serviceability and rough beauty. His work is collected by the worldâs finest museums. He maintained his pottery studio in Stillwater Minnesota from 1953-2018.

Keywords
Click a term to view the records with the same keyword
This object has the following keywords:
white
Additional Images Click an image to view a larger version

Your current search criteria is: Objects is "Untitled".