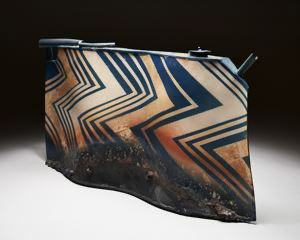 Gift of the Nora Eccles Treadwell Foundation with matching funds from the National Endowment for the Arts
1990.1
A primary goal of the abstract expressionistic movement in ceramics was to explore the mediumâs sculptural possibilities. Ceramists upended traditional approaches to scale and functionality, in Navaho Maru, however, Philip Cornelius considers the plasticity of clay. Trained within the vessel tradition, Cornelius began experimenting with the fragility of paper-thin slices of porcelain that had been cast-off from other vessels. Upon finding that the clay remained stable through the firing process, Cornelius continued to push the limits of porcelain calling the subsequent objects âthinware.â Navaho Maru draws upon Southwestern Native American decorative elements and challenges the traditional form of a teapot through its paper-thin walls, presenting the object more as sculpture than a functional vessel.

Born in San Bernadino, California in 1934, Cornelius received a Bachelor of Arts in Life Science from San Jose State University in 1960. He went on to receive his Master of Fine Arts from Claremont Graduate University in 1965, where he studied with Paul Soldner. He taught ceramics at Pasadena City College.

Your current search criteria is: Objects is "Navaho Maru".