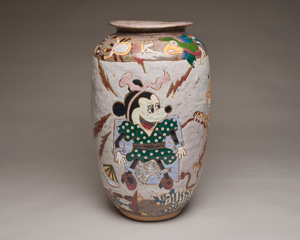 Gift of the Nora Eccles Treadwell Foundation
2001.64
Few potters have explored the overlap between ceramics and popular culture as the husband-and-wife duo, Michael Frimkess and Magdelena Suarez. In Mickey Mouse a classical ceramic form is juxtaposed with surface decoration depicting iconic images from American popular culture. This combination of mass media with traditional vessels plays with the convergence of cultural ideas; pointing to the variety of cultural influences that form the melting pot of American culture. Seeking to throw the perfect vessel, Frimkess adopted ceramic forms from Greek, Native American, Chinese, and Peruvian traditions. These forms acted as a base for Suarezâs painting of the surface, combining her perspective as a Venezuelan immigrant with a critical view a globalized American mass media and culture.

In For Popsicle Pete, Frimkessâs form draws upon classical Greek vessels which Suarez combines with images from popular advertising, comic books, and mythology. The vesselâs neck depicts a Chinese dragon a top a four-sided body, each side showcasing different icons of American popular culture. The titular figure, Popsicle Pete, references a popular advertising figure from the mid-twentieth century created by the Popsicle Corporation as the embodiment of the typical American boy. Other figures depicted include the little-known Marvel character Homer the Happy Ghost who was produced to capitalize off the popularity of Casper the Friendly Ghost, created by a rival company. The combination of classical vessel forms with popular culture imagery allowed Frimkess and Suarez to create potent social commentary to address politics, corruption, capitalism, war, and ecology.

Magdelena Suarez was born in Caracas, Venezuela in 1929. She was trained in painting at the School of Plastic Arts in Venezuela and later attended the Catholic University Santiago in Chile to study sculpture and painting. In 1963, she was offered a fellowship at the Clay Art Center in New York City where she met Michael Frimkess, whom she married and began a life-long collaboration. They established a studio together in Venice, California.

Michael Frimkess was born into a Jewish family in Los Angeles, California in 1937. Frimkess studied with Peter Voulkos at the Otis College of Art and Design and the University of California, Berkeley and was a key member of the cohort of young ceramists in Voulkosâs circle, including Ken Price, John Mason, and Billy Al Bengston.

Keywords
Click a term to view the records with the same keyword
This object has the following keywords:
animals, black, Disney, green
Additional Images Click an image to view a larger version

Your current search criteria is: Objects is "Mickey Mouse".