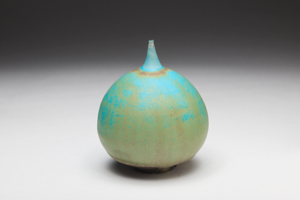 Museum Permanent Collection
1984.1004
Rose Cabat was an American studio ceramicist, classified as part of the mid-century modern movement. She was best known for her innovative glazes on small delicate thin-walled porcelain vases called 'feelies.' These are often in the shape of onions (as exhibited), figs (as exhibited), cucumbers (as exhibited), pears, and tomatoes. Many have glazes also named for fruits, vegetables, or flowers: onionskin, cucumber (as exhibited), apple green (as exhibited), malachite, olive, lavender (as exhibited), etc.. The top opening is often so tiny it wonât even hold the smallest reed; they offer beauty for beautyâs sake, without functionality. Cabat was open about her construction techniques, but when she developed a silky satiny glaze that made the Feelies so distinctive, she never revealed her formulas.

Rose Katz was born in Bronx, New York and married Ernest "Erni" Cabat in 1936. She began working in ceramics in 1940 after her husband brought home some clay from his job as an assistant to an art deco Austrian potter and sculptor. This simple act sparked a passion that continued unabated for the rest of her life. Then Rose got a membership at Greenwich House Pottery, NYC, where she learned how to use a potter's wheel. In 1942 they moved to Arizona, where she made coil pieces until Erni was able to convert a washing machine to a potter's wheel. Eventually, she had a Randall kick wheel, which she used to the end. Rose and Erni collaborated on the feelies and other ceramic forms; Erni ran the business, weighed out the glaze components, while Rose did the craft and the art. She continued to work in her Tucson studio until the end of her life, averaging five pots per day. In 2015 she was the oldest known actively practicing pottery artist in 2015 in the United States.

Your current search criteria is: Objects is "Bottle (Feelies)".