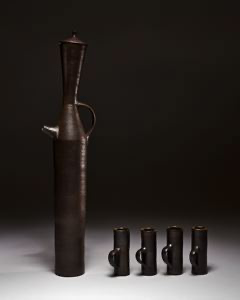 Gift of Nora Eccles Harrison
1985.256
Barbara Didukâs Ewer Teapot and Cups, might not be the most utilitarian set of vessels, but her work strikes a whimsical balance between traditional pottery and modernist sculpture. The stoneware forms, with a rich dark brown hue and satin surface texture, seem stretched and elongated to an almost comical degree. The Cups are perfectly functional, while the Ewer Teapot presents a funnel-like structure through which the water and tea are deposited, and a short, narrow spout which would produce a high velocity stream of liquid. As a whole, the work perhaps speaks more to the formal principles of sculpture than to the ease of serving afternoon tea.

Born in Germany in 1951, Diduk ventured to the United States to study Anthropology at the College of William and Mary in Virginia where she received a Bachelor of Arts degree in 1973. She then spent two years in England where she earned a diploma from The Surrey Institute of Art and Design before returning to the U.S. to pursue a Master of Fine Arts degree from the University of Minnesota. While there, she was under the guidance of renowned American potter, Warren MacKenzie, who helped foster her fascination with traditional and regional forms of utilitarian pottery. She turned this passion into an active international practice as well as a career as an educator, teaching at numerous universities in Minnesota, Missouri, New Jersey, New York, and Pennsylvania. Shortly before her passing, she retired from Dickinson College in Carlisle, Pennsylvania, having developed a highly regarded studio art program notable for its emphasis on technical precision and uninhibited exploration.

Exhibition List
This object was included in the following exhibitions:
Related Children(s) Click a record to view

Cup
1985.260
Also found in
Click a portfolio name to view all the objects in that portfolio
This object is a member of the following portfolios:

Your current search criteria is: Objects is "Ewer Teapot".