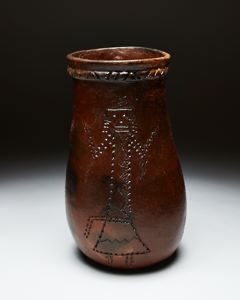 Faye B. Tso was a practicing herbalist, healer, and potter. Her pots were often used by family members in ceremonies due to the spiritual link between fire, air, and earth within ceramics. Born in Coal Mine Mesa, Arizona, Tso and other members of the Navajo nation were relocated to Tuba City, Arizona in the mid-1970s due to a manufactured land dispute between the Hopi and Navajo peoples on the part of energy corporations who desired access to the natural resources on the land. Tso continued to return to Coal Mine Mesa to dig her clay and gather pinon, a type of pine that was critical source of pitch resin used to coat and seal her pottery.

Your current search criteria is: Objects is "Untitled Dine Vase".